The Studio Boat #3 and Monet painting poplars on the Epte 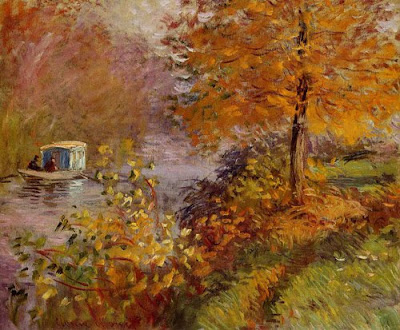 The Studio Boat (1875) by Claude Monet
oil on canvas / private collection
Claude Monet made a number of paintings of his studio boat.  This is the second painting - with one more to come.  In 1875 Monet was painting on the River Seine near Argenteuil.

I used to spend ages trying to work out how Monet painted some of his paintings - until I went to see the Manet to Picasso exhibition at the National Gallery in 2007, got the audio guide and heard how his habit was to use a studio boat on the River Epte - which is how I got interested in paintings of his studio boat.  (Click the link to see the location of the River Epte near Monet's house at Giverny)

Below is a sketch I did (see Sketching at the National Gallery: "Manet to Picasso") plus an extract from what I noted at the time. 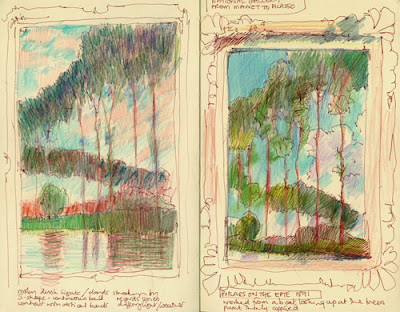 I started with two of my favourite paintings from Monet's Poplars on the Epte series. This time I got the audio guide and learned that:
The one on the left does not compare well to the original due to lack of the right colours in my tiny pencil case. The one on the right worked rather better - but I could have done with my big sketchbook!

Given the dates of the paintings I'm guessing Monet's habit of using a studio boat must have started much earlier when he first started living next to rivers.

For earlier posts about Monet and studio boats see:
For more about Monet see Claude Monet - Resources for Art Lovers
Posted by Making A Mark at Sunday, August 08, 2010

a boating expedition in Cornwall would be good!

Thanks Katherine...suh great info and yes, wouldn't a boating expedition be geat?
Ronell

One of my favourite tales from the history or art and indeed some of my favourite works. I'm delighted to see you've written about it and made your own lovely interpretations. This makes for a great blog - informative as well as creative. Wonderful!