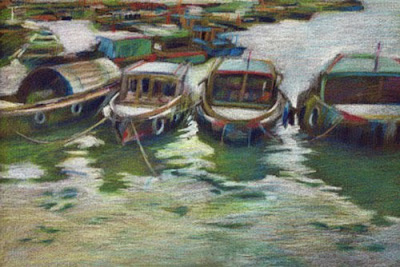 Sometimes you have an image which takes quite some time to come to fruition. This is the tale of one such image.

Back in 1987 I went to Singapore for the overseas field trip for my MBA so we could find out how business works in a completely different environment to the UK.

I wasn't even drawing at the time. My art had been left behind at school a long time ago and doing a 'full-on' MBA part-time at the London Business School at same time as holding down a management job meant virtually all my 'spare' time was accounted for. I remember I actually qualified for an NUS card as a full time student because of the number of contact hours we managed each month in School!

However on one evening we went down to the harbour and I saw the fishing boats at dusk. Something about them made me take a photograph. When I got the photographs back, it looked like a painting. I was amazed. I'd not really taken 'arty' photos before and I was very struck by the strength of the image - particularly of the boats in the foreground. However it got filed away along with the rest of my MBA studies and I got on with what was now a senior management job! 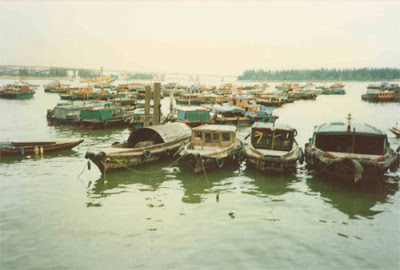 Some time later, I decided to try my art again as a completely different activity which would balance out the type of job I was doing at the time - artistic instead of numerical, solitary and peaceful instead of a regular round of meetings. It worked and that's when I started to get back into my art - starting with watercolour.

I subsequently realised that I really enjoyed drawing and in the early 90s started using coloured pencils again. Then joined an art forum in the middle of the last decade.

Eighteen years later I finally got round to drawing the boats. I'd had them in my head for a long time and went searching for them while I was leading a project about drawing water.

Now you've heard the back story, here's the whole sequence of images of how this drawing came about - plus an explanation of what I said back in 2005 when I did it.

Probably the most important thing I did was crop the photo so I started with something manageable from my perspective - the large photo is nice but I'd be doing boats forever as opposed to the water. 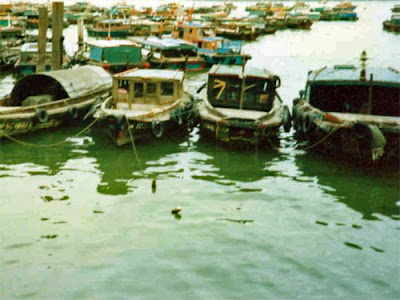 Next I printed off a colour print of the cropped photo onto A4 matte photo paper and a greyscale onto plain paper. I then gridded the greyscale and the black Canson into thirds. This is really just a guide for me - I eyeballed the drawing from there using a celadon green (background colour of the water) - not being too precious about super accuracy but enough that the boats don't look too silly and I'm keeping the proportions on the page which I designed into the crop.

This is a slightly smaller version of the image as I got my initial scans wrong and couldn't be bothered to do them again - so there's a bit more at both the top and bottom! 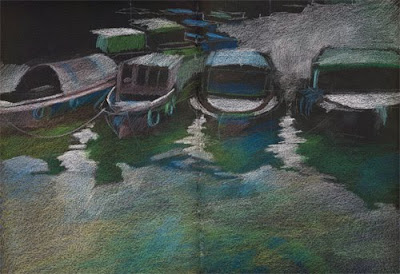 So far as the boats are concerned I'm only focusing on the big shapes at this stage - detail is not allowed until a lot further on when the decision gets made as to which bits get the detail. So there's a nod in the direction of tyres around the boat - but they're not carefully drawn nor will they be for the time being.

Then I started to get a layer down all over the area of water. I started by finding the right colour for the reflections of the boats and then worked on the lighter areas. Bear in mind I'm really scouring the photo for slight changes in colour and looking hard for what the colours are. There's a ton of hues between very dark green (which hasn't made an appearance yet) moving through beep blue greens and mid greens and sky blue and yellow greens through to an awful lot of tints of grey green and just a smidgen of white. (Do you want to know the colours?) I worked colours from both into the boats as I went to help the unity of the painting.

I'm working quite hard at this stage in getting the shape of both the reflections and the negative shapes inbetween them right - as in my experience this is what gives the painting the feeling that the water is 'real'. I'm also working over the edges of the reflections a bit so they don't get too hard (but without losing sight of the underlying shape) - they should be a tad blurry at this stage. I decide where to go for hard edges later.

I'm using the pencils on their side and cover vast amounts of paper really fast this way - plus it stops me being too pernickety about it and helps to merge colours in a pleasing way. I'm not too fussed about which direction I'm doing this in but broadly speaking it's a lateral movement. They're basically quite light layers - I'm not pressing hard at all. 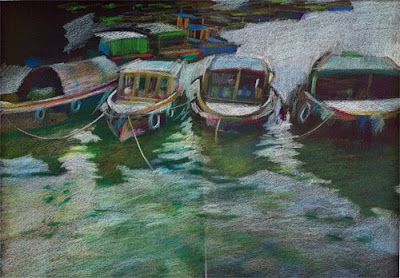 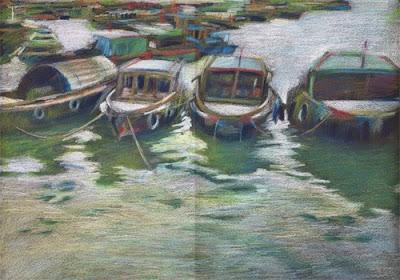 Subsequently I included the drawing in a portfolio of work for admission to an art society and worked on it some more to get to the drawing at the top. I do remember adding in a tiny bit more red on the boats. Unfortunately I have to tell you that coloured pencils have an unhappy habit of sinking into black Canson paper over time so although this looked good at the time it had to be 'rescued' to produce the image at the top of the post for the portfolio.

These process posts are so helpful, thank you! Though I'm far from being able to emulate them, I'm learning step by step.

In the same vein, you'd be interested in Stapleton Kearn's blogposts (going since late March, I think) analyzing the movement of ocean waves and how to paint them. It's quite detailed, knowledgeable, and unlike any other painter's posts I've ever read.

nice one Katherine, lovely limpid movement in the water

I love not only your color choices but your crop! Really beautiful! and you have captured the quiet serenity of the scene.

Beautiful boats Katherine! And yes, the crop makes all the difference. And I didn't know pencil could sink into the paper after a while...A nice piece of work...even more meaning to it, seeing from how far back it comes..
Ronell

I really like the greens in this. It does give a strong impression of still water.

The crop cuts out a lot of distraction and focuses the viewer on the boats.