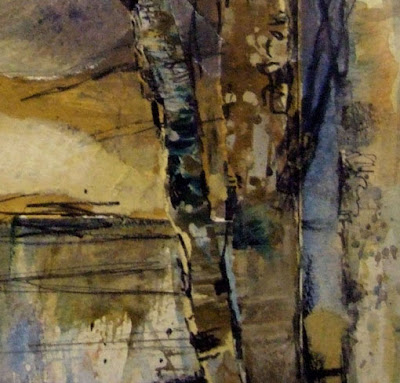 detail from larger work
Katherine and I are taking part in an exhibtion in California in November with friends - details later.

At the end of this post is a slide show of the work I've done - there are 5 paintings, with close up details following.

The work is based around Mission Trails Park in California. I needed to work around how I was going to tackle painting an area that is so different from the usual land and seascapes I paint here, in a very different climate. Needless to say it ended up involving water :>) Unusually for me, I was working on painting a place I don't know personally - a friend had provided photos and I used Google streetview, which was really useful for getting a feel for the area and did lots of research. Still, it was difficult. I usually work plein air and learn the feeling of a place as I sketch.

I started with the coloured pencil drawing of a still pool, reflecting the trees behind, the dry landscape very different from England - but the rocks and trees and reflections all interested me. I was trying to get to grips with the landscape there, the aridity, the rockiness, the mood.

As I thought about it, I realised that I wanted to abstract the images a little, play with texture, time, and shape and colour, experiment and include collage. All the works except for that first one are mixed media, using whatever was going to make the kind of mark I wanted. The joy of collage is the ability to move elements around to work out the composition before finally sticking down. 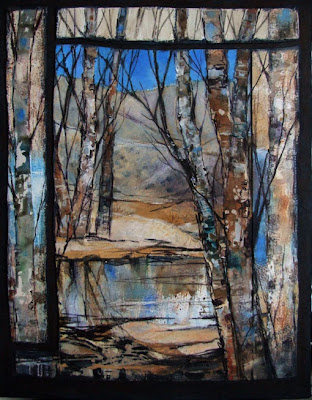 It went through several incarnations on its way and further work with scissors as it became rather overcrowded and needed room to breathe :>) I would have liked to have given it even more room but had to work to a specific size - 11x14 inches so that it would fit the frames at its destination.

Each tree is a separate piece of paper, with watercolour, monoprinting and drawing to create the bark. The background is also collaged and then painted and drawn into.

Each was pure experiment with only a loose idea of the final result, responding to the marks, moving the trees and background pieces around until I felt they could be fixed.

There is watercolour in there, coloured pencils, ink, acrylic, gouache, biro (ballpen) and charcoal pencil - maybe other things that I've now forgotten!

The dark background helped with the fragmentation of the image, the changes in time/viewpoint and linked to the black of the charcoal and biro. It isn't of a specific place but plays with a mix of elements from many sources and imagination.

The 'some, a little and a lot' guideline applies - with most of the painting in neutrals, the blue and purple becomes more important.


If I'd had Sarah's instructions on varnishing watercolours in time I would have tried it out on this one - I think it would work best without glass.

you can see earlier versions here 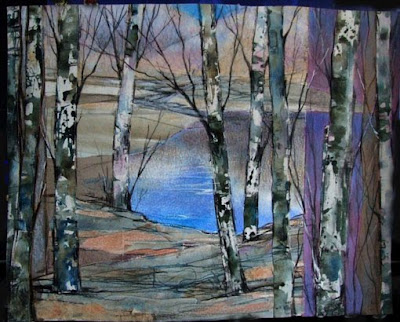 Towards Dusk
This one again plays with the idea of time and fragmenting the image. Daylight moves into dusk.

What do you think?

So glad you put in on here.I am looking forward to comments from your Watermark Buddies-- I always learn so much from all of you. I do love daylight moves into dusk. Lovely mauve.

Love the towards dusk one, so much depth, bet they look great in real life, I agree without glass would be fab.

The colours and contrasts are wonderful in this pieces. The textures of different layers is a great idea.

I so admire your fearless plunging in with different mediums! These are wonderful, Vivien. I so wish I could see the show in person!!

thanks Laura - it would be lovely to have a joint exhibition with all online friends - and all be there at the opening night :>)

Maybe we ought to think about trying to organise a Watermarks one?

wouldn't that be great?