The Lake and waterfowl at Kew Gardens

Last Wednesday I was sat in the sunshine, next to the Lake in the centre of the Royal Botanic Gardens at Kew, drawing this sketch and listening to the complete din which the birds were making combined with what sounded like tree munching.

It reminded me of city folk who go to the country for some peace and quiet and can't get over how noisy it is because of all the noises from the animals and activities which go on a rural area.

The Lake has a huge amount of waterfowl and they're all very territorial. 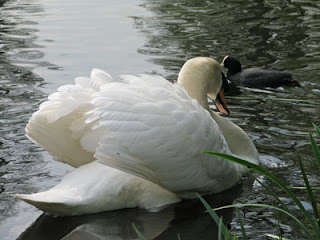 When we arrived we had a swan letting some Canada Geese know that they were NOT allowed to get into the water just in front of where I sat.
They tried it once or twice and the swan steamed in with wings set to "ack ack" mode and saw them off.  After which they took to marching up and down on the bank with occasional forays for a bit of weed from the edge.  We were sat there so long they began to ignore us so it was fascinating to watch.

In the meantime the gardeners seemed to be getting rid of prunings although it did sound rather more like they putting an enormous tree through the shredder as the noise was so loud.

The coots were being noisy as per usual (when are they ever not?)

Every once in a while some other Canada Geese would practice display landings by swooping in and doing a very "look at me" landing in the middle of the lake.  Boys will be boys.....

Believe it or not the sketch is not quite so luminous as the leaves were.  I had the combination of brand spanking new leaves with that incredible green - lit from behind by the sun - at the same time as the sky changed so it became violet blue as it thought about having a thunderstorm.  Thankfully that held off until we got home!

Link:  The Royal Botanic Gardens at Kew
Posted by Making A Mark at Thursday, April 28, 2011

I just love this water, Katherine, the light and all of the ripples. It IS paradoxical how territorial times raise such a din in these peaceful places. Of course, I'm ready--I just turn off my hearing aid.
:)
annie

The descriptions of waterfowl is funny. Just how they act all territorial and flashy. Swans...they always scare me and I keep a healthy distance from them.

I, too, love the cool palette and the rhythmic marks in the water here, Katherine. Lovely sketch.
I can't WAIT to find a watery subject for myself this summer! Seeing all of the work here is so inspiring!