Four fish out of water 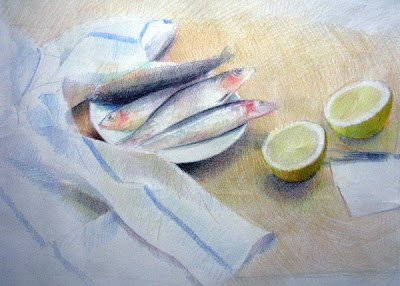 Following on from Jeanette's post yesterday about her fish, I thought I'd post a drawing I did recently while sat in the middle of the exhibition for the Lynn Painter Stainer's Prize! (see Lynn Painter-Stainers Prize 2008 and Exhibition)

It's very odd drawing a still life (involving what I think were herring) sitting in the magnificent Livery Hall hall of Painters' Hall - the home of the Worshipful Company of Painter-Stainers in the City of London - but that's what I did.

I should explain - that I was trying one of the workshops run during the exhibition. It's really nice sometimes to turn up for a still life set up by somebody else and all you have to do is decide what angle you're going to draw it from!

I took one of the large pieces of paper on offer and used my own coloured pencils. I used my camera to work out the four lines for cropping the image and drew out a pencil 'frame' on the paper in which to work. I then adopted my normal approach to sketching plein air which is to scribble using an open hatching method. It's also a good approach when working on paper this big and in a limited timeframe (this took about an hour or so).

Drawing on paper you're not used to is always interesting with coloured pencils as I never quite know how it's going to react. With some papers the coloured pencils just sink in and on others it's really difficult to get good darks. This one was slightly veering towards the latter and it took some time to get darks associated with the scales and shadows of the plate down.

I wouldn't have chosen fish to draw as a still life but I really enjoyed this and I'll certainly do some more in the future.
Posted by Making A Mark at Wednesday, December 31, 2008

Very nice composition and colors. I am very impressed you were able to complete it in an hour!

That's the great advantage of coloured pencils which nobody tells you about - they allow you to draw very fast!

There's a huge myth that all coloured pencil drawings take 200 hours - which is complete and utter rubbish.

Taking a very meticulous approach in any media ALWAYS takes a lot of hours. However there are usually ways in which you can use media which means drawings and paintings can be completed more quickly. I'm just somebody who believes that my art will improve the more I do - and I've developed a skill in drawing quickly because I draw a lot!

Oh nice...I like this. And I agree, it is fun to try someone else's still life set up.

I also agree that coloured pencil can be many things, from highly detailed to loose and painterly, all of which are beautiful.

I like the composition in this one and your use of cp's looks rich.

Did anybody notice the sidebar? We've officially achieved over 5,000 visitors in the first month of Watermarks!

It is now official..Jeanette and your beautiful fish paintings bug got hold of me too! as soon as I get hold of fish, I'll ask them to pose..
Love this composition and your usual delicate touch with the pencils!
ronell