I've never talked about my interest in water before joining this group and starting this project. What happened while writing this post was I discovered what I do when drawing water. The back of the brain had known it all along - but now it's got the front of the brain engaged and able to explain it!

When I draw water I want to produce a sketch or a drawing that has a clear sense of "place".

A very long time ago I did a degree in geography (and also studied geology!) which used to involve me in doing a lot of thinking about very different places and then analysing them from a lot of different perspectives. It's not easy to leave all that behind! What this all means is that when I make a drawing of a place as it is today, besides the conventional artistic considerations, I also like to try and understand the place, what it represents and why it looks the way it does.

In a way I'm trying to see the story of the landscape behind the surface of what I can see.

What that means for me is that I also tend to think about water as my subject in terms of:
For example, I live in London and never forget that this city is what it is today because of the River Thames! The slideshow at the top is some images of water in London - the lakes at Kew Gardens and in St James Park and various views along the Thames starting at Westminster and finishing at the Old Royal Naval College at Greenwich - which actually stands on the ground where Henry VIII had his Palace of Placentia (see Greenwich - very nearly sitting on zero). 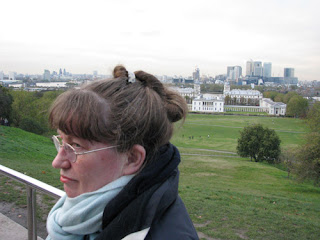 This is me standing on the hill at the top of Greenwich Park. It contains places with huge significance to maritime history . I'm looking at the Meridian at the Royal Observatory, the place where Greenwich Mean Time starts, the Old Royal Naval College is just behind my head down on the banks of the river and the big loop in the River Thames is just above my fringe!

I'm really passionate about drawing and sketching. I sometimes draw in pen and ink but usually draw in colour using dry media - coloured pencils and soft pastels. I often sketch scenes up and down the River Thames. On my website I have a gallery of sketches of the River Thames and London Canals - from Kew in the west to Greenwich in the east plus the lakes in the Parks and Gardens - hence the slideshow! 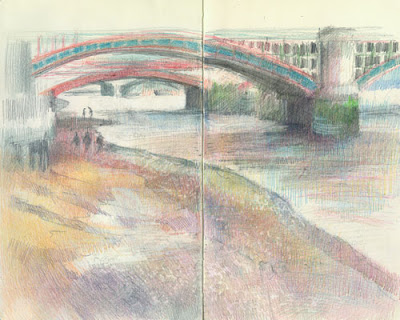 Here's an extract from the text which accompanied this sketch in The shoreline at Bankside on my blog Travels with a Sketchbook in......

Out of the picture and on the other river bank, next to the railway station was the site of the Norman fortress Baynard's Castle which stood in the southwest corner of the City of London, where the walls met the River Thames. It burned down in the Great Fire and the site is currently occupied by an awful lot of concrete. I used to have an office (on the same site) in a completely undistinguished concrete slab office block at Puddle Dock where I was based while working all over the UK in the nineties. Those bridges were the view out of my office window - so they're a very familiar sight for me.
The shoreline at Bankside

I also find that I often think about which artists have painted this place and this water before me! In the past, I've also tried to study and work out how certain painters I admire - Turner, Monet, Singer Sargent, Whistler and Winslow Homer - actually created their paintings involving water. A project I've had in mind for some time is to try and draw the Thames from the same places where people like Monet and Whistler stood to create their own artwork involving the Thames in London. 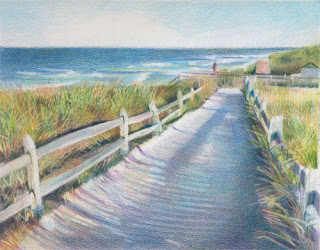 I also have a waterscapes gallery on my website devoted to various coloured pencil and pastel drawings of the watery aspects I've found on my travels in places as diverse as Big Sur in California, Cape Cod and Maine in New England, Greece, France, Venice, Bali, Singapore, Suffolk and Sussex!

Path to Nauset Beach
coloured pencils
copyright Katherine Tyrrell
I really like learning about how water varies in different places and different contexts - such as why the water becomes a deep blue off Cape Cod when the waters affected by a major hurricane in Florida are moving north - as was happening the day I visited Nauset Beach on Cape Cod. I even read Thoreau's Cape Cod to find out about how he found the beaches and the sea in his day and ended up discovering all about the phenomenal erosion rates on Cape Cod and the fact they had to move the lighthouse! (See Cape Cod National Seashore). I also visited Prouts Neck in Maine to inspect the water that Winslow Homer used to paint next to his home there! (See Travels with a Sketchbook in New England)

Vivien was the person who had the bright idea for this new project - and I've had a lot of fun with both Vivien and Lindsay in working through the logistics to get it off the ground - besides the blog we've now also got a ning community - also called Watermarks!

We're now getting underway as a group of nine artists and I hope you'll come back to see what the rest of the group are about and what we're likely to get up to in future. If you'd like to keep up with us the links to how you can subscribe are near the top of the sidebar column.

Speaking personally, I'm finding that I'm walking around at the moment having little lightbulb moments as I realise more and more things that come within the watery remit of this project.........ice skating anybody?

It's great to read about your thoughts on water Katherine and especially seeing the Thanmes through your eyes. And your drawings/painting are beautiful...look forward to the realization of those lightbulb moments!
Ronell

Katherine, what a wonderful introduction and what a mighty river the Thames is. I love the slide show and it gives me a real sense of the place you are working in. The river has real grit and great beauty. I look forward to sharing our watery adventure.

I think we have similar thoughts about water and how it impacts the land, the people and history.

It will be interesting to see your explorations unfold.

Well, as usual, Katherine, I go exploring all your great links in your post and forget to get back to the comment page.

I agree with what everyone has written here, and so I will add just one thing.
So totally out of sync with most pencils, am I, that I can only marvel at what you and others do with colored pencils and pastels. ICE LAKE AT SHEFFIELD PARK is one example of what I mean.
annie

It's certainly quite a different environment to Lindsay's slideshow yesterday!

Lindsay - what's amazing about the Thames is how big the change in levels are between high and low tide - and how high it actually comes.

It's an immensely powerful river too - very, very strong currents.

Jeanette - good to hear you're on the same wavelength re the background and the impact of water on the story of the place and the people.

Lovely intro, Katherine. You and I couldn't be more different in how we feel about the theme of water and how we approach it in our work, but I love that fact! Vive la différence!

I don't know my geology much but I agree - the way the waves carve the rocks and sand and the way it forms the shape of the land is part of what interests me :>)

A great intro - and writing for these and exhibition statements does clarify ideas and thoughts about the whys and wherefores for ourselves :>)

I don't know my geology much but I agree - the way the waves carve the rocks and sand and the way it forms the shape of the land is part of what interests me :>)

A great intro - and writing for these and exhibition statements does clarify ideas and thoughts about the whys and wherefores for ourselves :>)

A great post, Katherine: I like the inquisiveness and curiosity about the context that makes a place that particular place myself... though much of my art is more mediated, emotive. But, yes, I completely agree with good and close observation.

A very thoughtful and interesting post. I'm looking forward to seeing more of your work here.

Geography! You are full of surprises, Katherine. It makes sense though of the fact that your landscapes are always very credible (as well as beautiful) and I guess it is about considering the 'bones' under the flesh of the earth.

I really wish we'd had time to go sketching together along the Thames. More river drawings please and it would be lovely to see you break out those pastels again!

Thanks for all the comments

Robyn - we will certainly go sketching along the Thames next time you come to London - that's a "done deal".

I think my art is maybe less emotional and intuitive than others - althoughly I do think it's beginning to move in that direction. However I'm very willing and happy to be influenced by all of you who see it differently to me.

Just as long as I can still go and read up about the places though! :)

I'd love to join you for sketching too. :) Funny what you say about emotion - my art, the forming and making, is terribly analytical. Only the effect afterwards is emotional, the way people connect to it.

I'm sure you draw things partly because something in the image makes you a little happy!

Katherine - your last comment caught my eye as it was coming into my inbox... I am starting to get a sense of what great variety this group is bringing to the topic of watermarks ... and that will be truly fascinating.

I think I am rather conscious of being the part-time dabbler in loose art in this, but then again: different aspects/approaches are needed with people willing to experiment, and I am e.g. looking very much forward to learning more about close observation, watercolours and coloured pencils.

Katherine and all the Watermark Artists -- my sincere congratulations on such a wonderful blog and your underlying theme! I'm still traversing blogland and stumbled on Vivien's blog via interest in Shirley Trevena's watercolors; then saw the link to Watermarks. I live near and commute along the Connecticut River and paint the river frequently, so I think I can emphathize with your love of waterways! I will visit your blog often this winter --
Regards,
Kelly