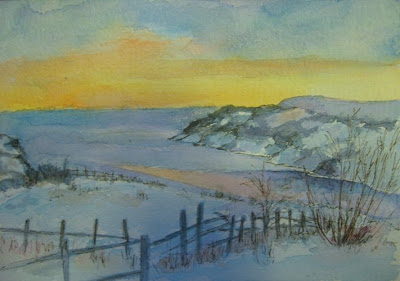 Its -12C with a windchill of -26 and I'm standing on the edge of a cliff at 7:45am watching the sun rise over the Atlantic ocean. Passing motorists think I'm insane and I'm thinking that they are the insane ones because they're missing something wonderful and only catching a glimpse out of the corner of their eye. I'm frozen. Partially with the cold and partially because I can't tear myself away from the view.

The cold wind finally wins and I head back into my car, having jotted down some basic shapes of land and sea with my Rapidograph, as well as taken some photos to confirm colours in my head for later. I add more detail in the car then put it away, waiting for my day at work to be over so I can really do something with this. 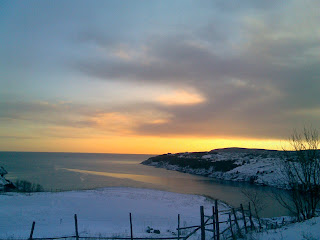 Sketches serve as reminders of scenes and inspiration when I need to go back for reference for a painting.

I've been considering a series of photos taking them at the same place at a similar time each day for a few weeks or perhaps a month, to really get a sense of how the light affects the land and the water. As I drive past the water each day to get to work, it would take me a little longer to fight getting back into the mainstream of traffic, but worth it, I think, to help me understand the water and how better to draw or paint it.

Of course this time of year, its not great in terms of temperatures, especially this week, but warming up in a day or two.

This sketch is a view over the bay in Torbay, the next town to where I live. Torbay holds lots of inspiration for drawing and painting with places such as Tapper's Cove, once called Treasure Cove because of its association with pirate John Nutt and is supposedly haunted by a black dog and a little boy. Or Gallow's Cove, again associated with pirating or stories created around it.
.
The community of Torbay experienced three French Campaigns the first of which occurred in December 1696. These invasions contributed to the eventual construction of the Torbay Battery in 1781, which was manned by 25 troops from the 71st Regiment and Royal Artillery. The ordinance was eventually withdrawn in 1795.

The name Torbay comes from an area of the same name in Devonshire, England and was first mapped in 1615 by John Mason. The word is, of course well 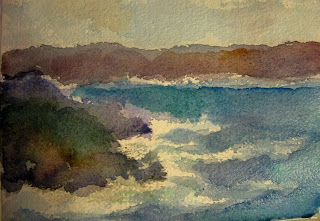 known, being the old Anglo-Saxon "Tor" which means a tower, and in a secondary way, a tall cone-like mountain, presenting some appearance of a tower. Both places are geographically similar with wide-open bays that face in a generally northeasterly direction. An extract from Bishop Field's Journal states, "indeed there seems to be a little colony of Devon folk in Torbay."

What a stunning view!

Plus I think you're crazy too ;) (those temperatures!!!) but I can well understand the temptation. I find those grabbed moments for a sketch when the view is so stunning make all the difference when you come to work it up.

Mind you that very intense light that you get at sunrise and sunset is always such a challenge isn't it? I've found that it pays to look for the darks. You know that old adage about you can't have light without dark? The light gains impact the more dark values you surround it with.

I'm remembering that somebody gave me a tip once which I've not employed but now I'm sketching in winter I think I might. It involves carrying a value strip around with you in your sketchbook - with (say) a 10 value scale. All you do then is sketch in the contours of the big value shapes and whack in the number of the value that you can see for use when you work up back in the studio. It's apparently especially useful for getting the values of the darks and the lights more accurate - all those ones which get inevitably distorted by the camera!

Has anybody else ever used this approach?

Ahhh! thats cold, but lovely, I love watching a baby day be born, not mad, just brave...that is cold. Torbay in Devon never gets quite that cold!
Good idea K with the value strip and numbers. I used to have a mural company and we once did a 600 square meter mural in a dark warehouse of the landscape of britain, so I had 40 pots of paint all with numbers on them then I drew the huge picture and numbered everything and my team followed on literally painting by numbers, for ages after I would pass fields and woods muttering "thats a 25, thats a 31" couldnt get the numbered colours out of my head!


you are NOT crazy! but that is seriously seriously cold

It would make a fantastic series to visit daily - please do it.

no numbers but I do find myself thinking how I'd mix the colours for the clouds etc as I drive to work and how it would be necessary to glaze layers to get just that glow in that part and ......

I go through some pleasant countryside travelling so I never grudge the 15 miles - it's half an hour of studying the landscape and sky and the light.

The idea being about how to find some useful shortcuts for very cold days/locations!

That is a fabulous idea Katherine and I will adopt it immediately. Its the perfect solution and prevents hypothermia in my case :)

And yes, a post on this topic would be very timely and useful.

That's funny Sarah, but I think we all do it to some degree - assigning colour names to landscapes. I even jot them down on a working sketch sometimes.

And yep its cold this week (-22C with windchill this morning) but a snowstorm due tomorrow so that should warm things up nicely.

I love the light here too Vivien. Dawn is my favourite light, sunsets work similarly but the seem more golden. Dawn has rosier tones I think.

I'm getting so I know who's posting before I see the name.
Well, you are in very good "mad" company here with your dawn desires!

Well this is really timely for me.

First let me say I am so glad to find another Canadian Atlantic artist.
Secondly I am consoled to know that I am not alone when it comes to freezing in a Canadian Atlantic winter.
I decided to do more landscapes this year but the exposure to the elements is not helping or encourageing.
I live on Prince Edward Island. A very pretty spot it is, in any season. I too have found that early morning skys and late evenings are best for color and contrast and enhance any location. The midday sun oversaturates all the colors to shades of grey and there is little interesting contrast. I go nowhere without my camera and get the "crazy woman" stares from passing cars too, usually farmers and fisherman, who fail to see the beauty of the glow of the sunset hitting the frozen water. Then there are times I have to wade into 3 feet of show to get the right angle!

Anywhy I just wanted you to know I am glad I found your blog. We may have to set up a "Freezing, Crazy, Canadian Artist blog.....

I can now recognize individuals' styles here too Lindsay. Its wonderful. I'm always impressed at the diversity of styles but the commonality in passion for water and art.

Audrey, how lovely! You're just up the road from me. :) I'll definitely keep you on my list in my other blog as Atlantic Canadian artists do need to stay in touch. Or at least stay warm.

Yes, the things we go through to create the perfect image is amazing sometimes. I sometimes imagine the conversations around the kitchen table that evening. 'Mary, you'll never guess what I saw this morning. Some crazy woman standing in a field drawing or something. Must be a townie.'

I know you're cold and you want to be in Alberta and warmer parts, but, oh, my, how lucky you are to have this magnificent, cruel world all around you. Jeanette, I am so excited to see how you're taking up these watery challenges and how lovely your work is as you go your way, exploring.
Yay, you!
PS I guess we'll have warmer weather in July ;D.

Laura, technology will bring other places and people to me. Meanwhile I'll keep working on capturing the world around me. Cold or not!

I think July should provide you with some good weather. Just bring a warm sweater... :)