I sketched this image of Horrid Gulch in Pouch Cove a couple of years ago. Its a cropped view from the top of a steep cliff overlooking the jagged rocks and sea some hundreds of feet below. I always find it a bit creepy going there. Not because of its history, but because I don't do heights well and hate being anywhere near the edge of a cliff. This is why I didn't do a sketch looking down over the cliff. Winter provides weather restrictions here in terms of accessing places and I know I won't be able to create some of the pieces that I want until spring or summer. The historical aspect of Newfoundland's association with the sea interests me and capturing moments of that history in art will be very satisfying.

Horrid Gulch was where the Water Witch went aground on November 25, 1875 in a storm with 25 people on board, Alfred Moores, a resident, performed a daring rescue which saved 11 people. He allowed himself to be lowered to the ship by a rope from an overhanging cliff so that he could carry the people to safety.

All true-born Newfoundlanders pray hearken unto me,
And hear your messmates tell you all the dangers of the sea;
You all remember Pouch Cove well, and the true sons so brave
Who saved the crew of the Water Witch so near a watery grave. 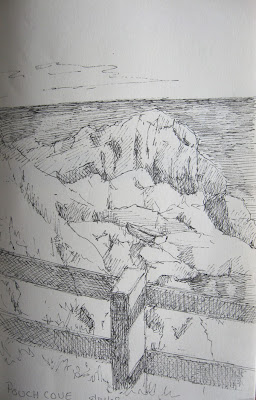 Some of the words and dates in this song are a little skewed, but the event is clear and true. The descendents of these rescuers still live in this small seaside town of Pouch Cove, where I once lived. The plaque commemorating their bravery stands near a section of the East Coast Trail and leads to the cliffs that overlook Horrid Gulch.

This map from Google Earth shows the gulch and cliffs along the ocean where the Water Witch came to rest. When the weather improves and snow goes so I can access the trail again, I will go there and take some more photos and do some sketching and painting. The view is wonderful from this point, looking out as far as the eye can see to the horizon, with whales below and a strong breeze blowing. 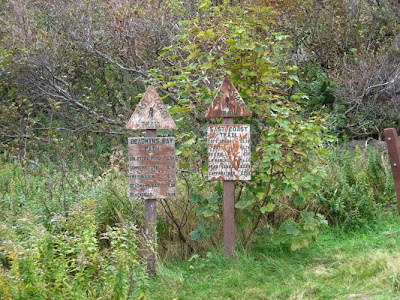 Excerpt from the Newfoundland Express December 3, 1875

Loss the the Schrs. "Hopewell and Waterwitch" and nineteen lives

Two most distressing marine disasters, involving the loss of nineteen lives, with long make memorable the storm of last Monday night. The early part of the evening was moderate enough and about four o'clock a craft called the Hopewell left here for Harbor main with eight souls on board and a quantity of provisions, Towards dark a gale sprung up with heavy snow-drift, and at eight o'clock it was at height of its fury. The Hopewell ran on Biscan Rock, near Cape St. Francis, and in a very short time was broken up, all on board but one man going down to a watery grave. The survivor, named WAUGH, got on to a rock and there he remained all night and a great part of next day. When the Hercules neared the spot, on her round to Conception Bay , about noon on Tuesday, this poor fellow was s een waving a handkerchief; and Capt. BLANDFORD, of the Hercules, promptly manned a boat and sent her with a strong crew to effect his rescue. The waves ran so high at the time that they could not get near enough to throw a line within WAUGH's hold, and a second and third attempt were made before they succeeded in reaching him with a rope and life-preserver. After three hours spent in the utmost endeavors for his safety, WAUGH was pulled off on board the Hercules in most exhausted condition, but at all events, saved by the heroic efforts of Capt. BLANDFORD and his crew.

The Waterwitch which left here for Cupids, soon after the Hopewell , struck in the neighborhood, of Cape St. Francis also, much about the same time. There were twenty-five persons on board, and of these twelve, eight men and four women, went down with the vessel. The following letter from Rev. Mr. Johnson, Church of England Minister at Pouch Cove, shows how the survivors of the Waterwitch escaped and no praise can exceed the merits of the Pouch Cove people in the saving of these poor creatures and the care and tenderness with which they succored them. (See same letter under date of Dec 3, 1875).

I like this and share your fear of the edge of high cliffs! my family don't and used to practically give me a heart attack by standing on the edge looking down and laughing at me pleasing with them to come away!

That's exactly what I meant in my original intro when I said I always like to find out about a place that I draw!

So many of the places we look at today have an interesting history.

I love the CP sketch BTW - you should do a lot more of those.

I loved that spot - and may I just say I did go up the trail in the snow! :) It would have been great to explore with a local, your painting gives a good sense of height which is so hard to do.

History fascinates me and gives new meaning to the place in my eyes. The height of the cliffs is a bit daunting and I'm like you Vivien, hanging wayyyyyyyyy back while others peer over the edge. Shudder.

Yes, I have more cp sketches planned Katherine. They're good at capturing colour quickly - and they don't freeze in the winter! :)

Tina! You brave soul! You went up the trail in the snow? It depends on how much snow is down, but I'm a wuss at the best of times, I don't like trudging through knee high snow to get to the top. But if the snow pack melts to a reasonable level I'll venture up again.

waves, whales and witches....You have no idea how your post makes me wish I was there! You really have a way with cps too! Beautiful sketch.

I agree with Katherine about the value of this knowledge and research into an area - I've got a thick and fascinating folder of stuff I built up on the local waterways. I really enjoyed researching it and it added to my understanding

- your knowledge of the stories and history is bound to feed into your work more and more as this series grows :>)