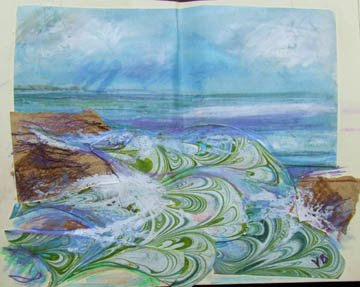 High Tide. Vivien Blackburn. Collage/mixed media in a little moleskine
Sometimes it's nice to 'play' as Jeanette is doing with her lovely fish - trying out something different, experimenting, getting away from what you normally do and discovering new ways of working, new marks to make, new visual language that can feed into more finished work.

These are some of the collages that I've been playing with in sketchbooks - the idea for first one was triggered by some lovely marbled wrapping paper that Lindsay had sent with something - it just needed to be used :>) It wouldn't be light fast enough to use in a 'finished' work but it's great for experimenting in sketchbooks. I also used fragments of brown paper and the brown tape you seal the backs of frames with, for the rocks. Then a mix of media for the rest including cp's and oil pastel.

I cut up and pieced the marbled paper to give the swirl and perspective of the waves and then scribbled and altered, covered or enhanced areas to try to get that swirl of waves crashing on sand and rocks. 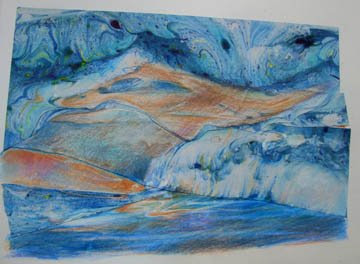 Waves on smooth rocks. Vivien Blackburn. Collage, hand marbled paper and mixed media
The second one, Waves on Smooth Rocks, has been shown on my blog but I've reworked it so that it now looks rather different and I think reads much better. The paper in this one IS lightfast because it's some I made myself - yet another thing I want to try again when I can. I'm going to have a go at the shaving foam method that I've been told about. 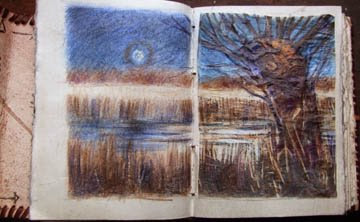 In the last one, the right hand page is one of the series of linoprints I've been working on. It was printed onto tracing paper - I was experimenting with various papers. Then it was worked into with coloured pencils, mainly Polychromos and Lyra, and the image extended onto the facing page,
This one makes me think of the mood in a Samuel Palmer painting, I don't know about you?
All of these have given me ideas for larger works and make me consider incorporating collage into finished work.
Posted by vivien at Sunday, March 01, 2009

I've never done a lot of collage, but you inspire me to try some now.

Samuel Palmer - that's what some of this printing stuff has been reminding me of! How did he work - was it ink and watercolour?

We're never too old to play!

Vivien, these are some very exciting experiments. I love how we are all showing process along with finished pieces.

The marbled paper is so dynamic.

Thanks Jeanette :>) - I haven't done a great deal of collage either but it is fun. At uni we had to paint our own papers for it and that meant they were lightfast and we could get subtle as well as bright colours.

I think some collages sold that have magazine pages and stuff in will look very sad and faded in a few years.

I think that's one of the really nice things that I hoped would come out of this group blog and IS - the sparking each other off with ideas and ways of working and subjects and ..... etc etc etc!

You and Lindsay with your series of linoprints made me persevere and find my own voice with them when I may have given them up as too graphic for me :>D

I never really studied Palmer Katherine - though I really must. I like his work and the strange moods he creates and the marks too. I think Glen studied him, I must talk to her as well.

The marbleized waves are brilliant! I love your inventive playfulness.

you are so good at the experimenting stuff Viv...and mix Sam P with Arthur Racham, love them both, then you have the mood of these willow ones

Beautiful playing around Vivien...you can take anything and turn it into a piece of art!
ronell