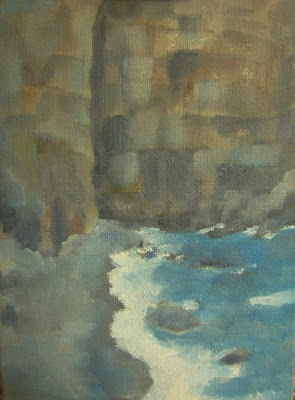 Stiles Cove
oils 5 x 7
Once upon a time there was a tiny beach in a tiny cove with slate and granite walls towering vertically around it that was tucked far away from the average visitor. This tiny gem of a place is called Stiles Cove and is what prompted this little painting study. 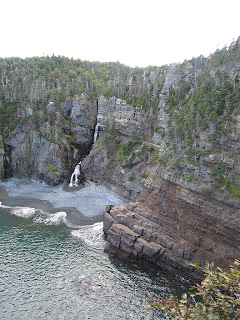 This little shore of broken slate rock is quite near me but only accessible by foot. It was once part of a US military radar station during the war and a long ladder extended from the top of the cliff to the beach below. A few years ago, the military blasted the ladder as it had become unsafe as children and daredevils wanted to chance their luck on it.

Water tumbles down the rock face, spilling into the ocean from a small stream. Its like a miniature landscape with every element you could desire.

This photo by JohnW shows the cove from a different angle, I've only seen it looking down (much as I dare) straight down to the little beach below.

You can see the distance to Stiles Cove from my house (circled in red). The ocean is very close - two minutes by car and I am on the beach in Flatrock. The hike to Stiles Cove is about 600 metres from the end of Satellite Road, just north of my house. There is a hike along the East Coast Trail from Stiles Cove to Pouch Cove which is about 11km for the more adventurous. 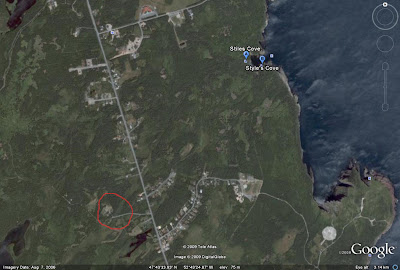 Once the weather is better (it snowed all Saturday and last night), I will get out to the cliffs again and be able to do some on site drawing and painting. Til then, I'll have to make do with memories and photos to create some paintings with.
Posted by Jeanette Jobson at Tuesday, March 24, 2009

go down by a ladder :>O my knees turn to jelly just thinking about it!

It must be lovely with the waterfall - any friends with a boat????

Once again, I'm sooooooo envious of you being this close to the ocean and such a beautiful cliff.
Me too, V on that ladder....gulp.

I could never have gone down the ladder, not for all the money in the world. I think it was mostly for military use during the war and some brave souls who dared the cliffs to reach the beach below.

I don't go to cliff edges on principle - and the because I've got very poor balance and there are magnets in the sea ready to suck me in!

I'm really enjoying all your paintings of the sea - they all seem to come with a good dose of salty sea air!

the picture is beatiful of that cove, as is your little painting! You have such an array of inspiration and beaty right there on your doorstep...lucky, lucky!!
ronell

Yes, heights are not too great for me either; the pictures and the maps are very good to get a sense of the place - how lucky you are with that coastline so close!