Here's the thing. I'm posting these water studies, not because I think they're wonderful finished paintings---no! They are simply steps along the way, as I try to figure out what the heck I'm doing here on my watery painting journey. Though I'm rusty after mostly drawing for the past four years, I've been painting assiduously the past two weeks and am committed to doing so all this year--something's going to happen, painting-wise, eventually!
My goal was/is to reach a level of stylization and abstraction of the subject matter, but in what guise, the process itself will reveal, through time. I, personally, have no clue. And if I don't, how could you?
So I just start painting each painting and then I'm as surprised as anyone when something very 19th century, as in the first study, stares back at me. I don't hold with people who try to paint like, say, Monet (I'm not talking about learning by copying from the greats, but consciously making finished paintings to sell, in a period style.) But I digress.
Anyway, I was dismayed, briefly, to see myself channeling some 19th century hack painter, but my way is to just do it and get over it. Get on to the next thing,
The second painting is rough but I'm not going to take it any farther. It's served its purpose. I like the movement in it. That is one of water's chief attractions as subject matter to me. 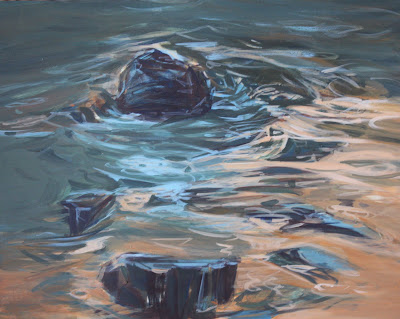 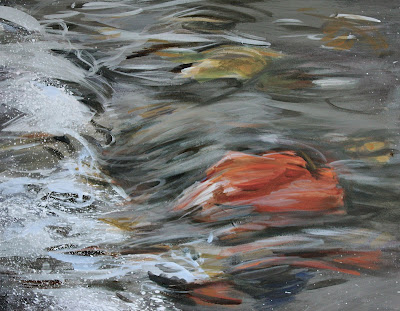 Both studies are acrylic on board, 11" x 14", and both are based on sketches and photos from a trip to Iceland last August.
My husband and I are driving to the coast this weekend. Our coast is placid, very unrocky and unIcelandic. Sometimes you float where you're planted.

Sounds to me like you're very much trying to do the same thing as me. It's difficult isn't it!

I'm getting much clearer about what I want to do as I try. Not so clear on how to do it - but occasionally there are flashes

I guess this is what we call work!!!

I think I actually prefer this approach. Anything which is hard won rather than coming easily always gets valued more at the end of the day - by me if nobody else!

One comment - and I don't know if it helps. I find it difficult but recognise that I need to stay more at the abstracted big shape/tone level for longer before wanting to add detail and nuance. I think that might possibly have some resonance?

I do like the motion of that last one. Amazed that anyone can capture that roll.
annie

Well I don't know if its because I'm not that familiar with 19th century hack painters, but I really enjoy these studies, including the roughness of them. Both have wonderful sense of movement, the bottom one slippery, rushing and gurgly and the other more languid. It will be so interesting to see where this journey takes you.

Great observation, Katherine, and I think you're right about staying with the tones longer. I'm so impatient with these---I want to learn and get on to the next one! I'll definitely keep your suggestion in mind this morning in the studio.
Annie and Cathy, thank you.

I think the second one is very successful and not hack like at all! The movement of the water really reads well and the sense of light.

I so agree with the sterility of copying artists styles and taking them as your own :>(

Lovely water movement Laura, I can hear it! You've gotten that rush of water over the rocks. I'll have to examine this more closely...

I reach a point when the painting takes me over and leads itself, not the other way around. Some days that works, some days not, but its always interesting and helps me learn.

I'll be watching, Laura!
I like the second one a lot - its composition, movement and the spray. It's an intriguing mix of surface and movement

Your lyrical line shows up on the second one very clearly. This "bounce" in your drawings is one of the things I love about your work. I'm feeling my way along too and much as I HATE not knowing where I'm going, that's part of the adventure. Hang in there!