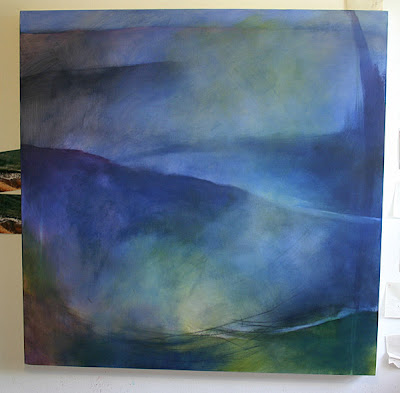 Some progress from the abstract camp!

Back in this January post I began my adventure in trying to paint a rougher sea for the first time - trying to capture more threatening moods in the sky, more crashing waves, but with my usual soft minimal look. My preliminary sketches were more freeform, and the canvas itself has been more exploratory. Unlike most of my paintings I decided to just dive into this one and see what happened, allow myself experimentation.

It all started well. Some dark layers, bringing tones and composition upwards, over the eye-line of the viewer. At an early point I liked the underpainting so much and felt I wanted to capture some of it in the early stage for "light" lines to indicate, perhaps, foam on the waves. So I put down masking tape that I could glaze over and remove later to bring back those elements. 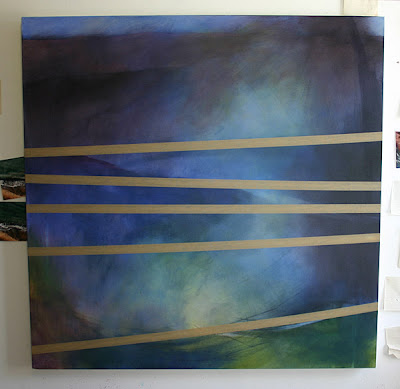 Painting, painting, darkening, lightening the crashing waves, and got stuck. But of course there's that very misleading tape that actually isn't an indication of what's underneath - distracting me from what the whole looks like. So I removed it to reveal... well, something interesting. Interesting isn't necessarily a good thing!

So now I'm really frustrated. I have to keep reminded myself that this canvas is meant to be an experiment, but it's all to easy to get caught on in the drive to "finish" something after so many hours of investment. 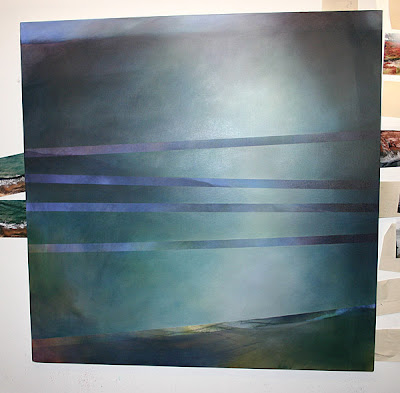 The problems?
Trapped in the storm for now...

I think you've done a very thorough analysis of the problem you've presented yourself with. So true.

The thing is - if we just for a moment pretended that this wasn't rough sea and we got you a pseudonym, don't you think it would be snapped up by somebody? ;)

- straight lines, particularly all the same width, sort of fight the rough sea idea to me and calm it down

There are lovely elements

- working further on it I'm sure you'll pull it round though :>)

I like the very first image because it has so much movement. The second image has some punched up values and I think this adds to the drama. I also like the disoientation of no horizon line. Perhaps, hew to your original impulse? It's an interesting problem.

I think the piece has a lot of possibility, but I would get rid of the taped sections---they seem gimmicky and arbitrary in the context of the painting and are causing problems as a result.
I'd let this one breathe on its own for a while and start one or two other pieces. The way forward might become clearer after a period of benign neglect.

Sometimes ideas don't move in the direction we originally wanted them to.

I really do love this painting. The movement and colours are beyond wonderful. The lines are distracting in some ways, but in others, it makes me want to peer into the glimpse of another world behind the water, so it appeals to me in that sense.

I agree with Laura, let it sit for a few days and see what it tells you to do. The painting is always right in its advice.

I particularly like the diagonal lines in the first image, and that bottom curve: it's like the way a wave flicks up as it crashes down.

The contrast of the soft blended areas and the hard edges of the tape is very interesting. Maybe another set of tape angled on the diagonal?

I agree that some time away from it might make a solution clearer.

I like this a lot too - not saying it is not problematic. The first one is interesting because of it's lines and definitions and seeing it worked to a higher key unsettles that.

The taped off sections - hm... I'm curious to see how this may change in response to Vivien's points on intervals and rhythms. I remember your piece which worked with Twombly's lines, and it was fascinating to see how your worked these in, they changed, got reworked and became something very interesting. This may be were the taped sections could go too? Though their uniformity may be more difficult to integrate, but it looks like a good challenge in any case.

I dont know why I havnt commented before now as I keep looking at these, the strips revealed reminds me of when you glimpse a little blue beyond a storm, a hint that all the world isnt caught up in the weather you are in, plus I love the colours.

I can relate to your analysis, but I also want to add that we are sometimes our own worst critics. I really like the first image with its beautiful colour and yes, maybe leave it aside or a while and your can come back to it with fresh eyes later.
ronell