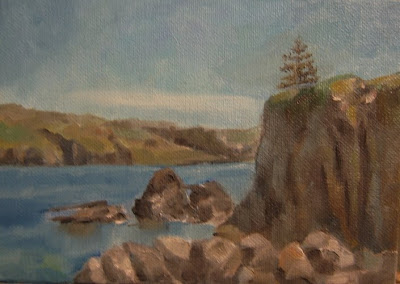 If you descend down a very steep winding road in Torbay, you enter Tapper's Cove. The road is guarded by a padlocked gate warning of vessel traffic only, so venture down with care. I wouldn't want to have to reverse up that steep road when faced with a truck hauling a boat. It has a small wharf and slipway and steps leading up the side of the cliff and on to a walking trail. At water level you look out over Torbay on the opposite side of the cove.

Tappers cove (treasure cove)- Tappers cove was once known as Treasure cove because of it’s known association with pirate John Nutt. It is also haunted by a black dog and a little boy relating, again, to the pirates that buried treasure there.

I didn't see a dog or boy ghost or find any treasure, only sparkling water and a little spruce tree perched on top of a steep rock face, defying the salt spray and sparse soil to grow. Unfortunately, photographed under artificial light, the image caught the glare of wet paint and at only 5 x 7, the impact of the painting doesn't work close up, in my opinion, so another small version to see if that helps.
Posted by Jeanette Jobson at Tuesday, May 26, 2009

Wonderful view and it sounds like a really interesting place. Your stories about Newfoundland keep reminding me of Cornwall and the Islands off Scotland.

I think this might be one which would be good to do in different seasons - what do you think?

What a world you live in and paint! I can't imagine having such visual richness all around. This is a lovely rendering, Jeanette.

All of Newfoundland is steeped in history and folklore. Its Celtic and British roots keep the stories.

The landscape itself is very similar to Cornwall and Scotland - full of ancient rugged rock and sea.

Seasonal paintings of this view could be interesting, but winter would be virtually impossible unless very early winter, as the road to the cove would be impassable with snow. There are no houses on the access road, so it is not snowploughed.

There is never any shortage of inspiration Laura.

lonely little tree! it certainly is fighting for life in an exposed position like that.

The names sound so strange and displaced - Torbay is a built up manicured tourist area here! and your Torbay is so different :>) wild and lonely

I adore a painting "with a story" even though the pahntoms aren't there in your painting, but I can clearly feel the atmosphere. And like vivien said...fascinating names!
Ronell