My ongoing English Coast project gives me first-person up-close experience of changes along our vast coastline (so vast I've not even cycled 10%!). While I appreciate the effects and implications of erosion often I see it from a strange mixture of an artistic and a pragmatic point of view. Here I'll share images from my photo-journey that I use as painting references. 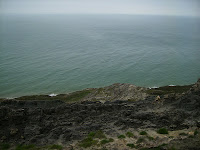 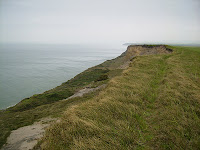 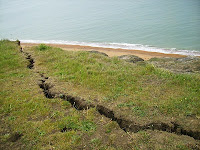 Left to right: Blackgang cliffs looking down; looking across the clifftop at the walking path, altered several times; the clifftop literally breaking off along part of the walk. 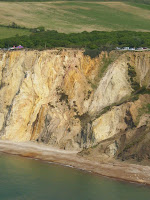 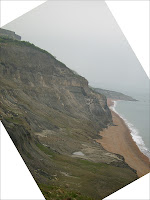 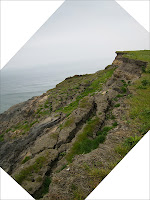 Left to right: Alum Bay where tourist sand novelties are made with shipped-in sand, it's forbidden now to take away the unique geology; two more views east and west along the cliffs at Blackgang Chine.

What's shocking is that this entire area used to be a thriving tourist industry! Less than 60 years ago. Areas populated and accessible in the 70s are now underwater. See this site for historic postcards and photos.

"This is the first real coast trip where I felt and saw a real environmental change in progress on the English coast. But I don't see this as negative because it simply is a natural consequence over time - be it a consequence of weather, temperature, erosion, human activity or other factors (human beings being, of course, part of nature). The destruction at Blackgang for example is profound and astounding, but perhaps my role is to capture the sight, the feeling. We can't stop the sea."

Even more striking to me, if that's possible, were the coastal changes in Yorkshire, from Bridlington down to Spurn Head, where I cycled in late 2008. The reason the differences were perhaps starker was simply because the human aspect of the landscape had been affected and the remnants were still very obvious. To be told a whole village is gone is one thing - to see existing roads ending as rubble in the sea is another. This has happened in the last 10 years, the areas were on my OS map. 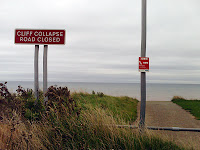 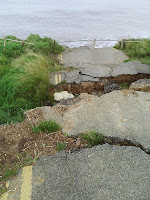 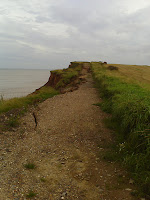 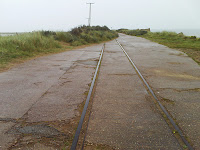 Left to right: Warning along the road; Then it's remnants falling down; This path used to be a road that curved around following the coast and then up to the next village, and there was even a farm depicted on the latest Ordnance Survey maps - now it's a worn path along the field edge; A disused rail track on Spurn Head penninsula, which used to be much wider.


But beauty comes from even this. This sights resulted in some of my favourite paintings to date. 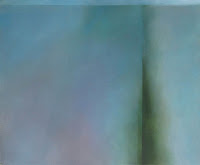 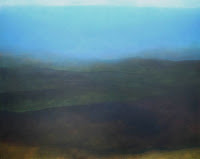 Up jumps the geologist amongst us!

The whole of the UK - to the east of a line from the Severn to the Wash - is gradually sinking and consequently quite a lot of erosion is entirely natural and has been ever since Gondwanaland and plate tectonics got going! :)

The UK has a tilt - and hence issues like flooding in London where we both live is a very real issue!

However the really important issue for us is the extent to which global warming is changing the weather systems so that our coasts are experiencing different currents and waves with different destructive forces. Plus inland we're experiencing more rain in the summer and huge flooding episodes where builders have built in flood plains.

The natural forces which exist have enormous power - what we're doing is speeding them up and changing where they act - in a totally uncontrolled way.

A huge hotel fell down the cliff a few years back in Scarborough and there was a massive landslide in Blackgange Chine about the same time I think it was.

There have been similar occurances of coastal erosion in Newfoundland as well - Daniel's Harbour being the most recent. Islands don't fare well in climate change. Geography changes and with it lives change.

What spectacular views in the top photos and what sad ones below... NAture does evolve and change, unfortunately we are speeding it up and bringing on "unnatural" changes, which is what is really scary.
Ronell

Great pictures, how scary that there are places on your map that have gone. What an illustration of the changing climate.

Some of those photos are shocking. It's as though the costal regioins are being chewed up by the sea and geologic processes.

Katherine, it's interesting to read from a scientific point of view that this subduction is a natural part of the landscape. Disturbing though to know we humans are making things worse.

Great post, Tina - and I see Katherine got to the sinking/rising tilt before me :) - I very much agree with you on the pragmatics of this - the effect (and its acceleration through global warming) are desastrous for the communities affected but does it make sense to fight this by dams etc? My vote is for the causes in this case.

The photos and the paintings are stunning - I do have a few recent sketches/photos of much smaller scale erosion but the cracks and lines created through these processes are forever intriguing to me.