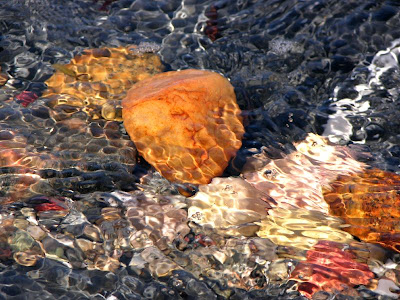 Newfoundland benefits from being an island in terms of its ecological footprint on the earth. Lack of industry limits pollution of air and water, but the simple act of living creates its own challenges. Raw sewage still pours into the ocean from harbours, as it does in many parts of Canada and the world. The problem is being addressed, but it will be years before the harbours are fit to see anything besides seagulls in them.

There has been clean up of rivers in the past few years and one success story is the Rennies Mill River which now teams with fish and wildlife. 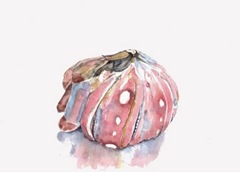 Fish are the equivalent of the canaries in the mines and are the first to show that something is not right with the water. Frogs as well are never present in polluted waters. I am lucky where I live in that both are there in the water that flows from its source to the sea. If they leave, I will know there is a problem.

The Atlantic ocean is clean by many standards but still poses problems for fish and mammals that make it their home. The fishing industry is dead or dying so the incidents of whales becoming entangled in fishing nets is limited. Ghost nets still roam the sea, making life a misery for those who encounter them.

Plastic carrier bags and rings that hold six packs of cans together cause death on a daily basis for both sea creatures and those on land through slow suffocation or entanglement.

While Newfoundland is blessed with clean air and clean water, we still have a way to go towards a cleaner environment and a smaller footprint on the world.

Thanks for a lovely post Jeanette! It is scary to see what we humans are doing to the only "home" we have. Great accompanying art and pics too...
ronell

beautiful place you live in, the sea with the boats looks so blue. It looks a bit like the islands off Noeway where I used to live.

Well put Jeanette and how important is is to take care of such a beautiful place.

I really don't know why but I had this concept that there was no plastic in Newfoundland!

Somehow it's worse seeing the things we do to our planet in places that are really beautiful.

I have a feeling though that you have less people to win over to the idea of being green in Newfoundland......

good post and everyone has already said what I'd say .... I'm too tired to come up with anything further!

I'm not much of a bird/animal watcher myself, but yes - your post highlights the significance of wildlife as indicators for change (for the better, but also too often for the worse). I got a bit of sense of that when I was in Chile with my friend who's much more into living wild things and much more knowledgeable than I am.

Thanks from me, too, Jeanette. Such a thoughtful post about your beautiful sea world. I am surprised that any company in any country is still allowed to put out those plastic rings on six-packs.
annie